'Kopis'-blade forms of the Indian subcontinent 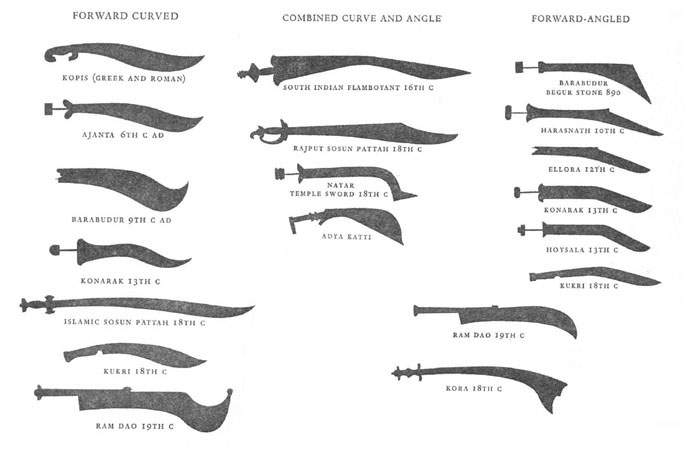 adapted from Rawson (pp. 68-9):
'The term Kopis has here been adopted to designate a blade form which is found in many parts of the world. It has a narrow section near the root, above which the blade broadens and curves forward, attaining its greatest width near the tip, and then slightly recurves and runs to a point. The term was adopted by Lane-Fox, afterwards Pitt-Rivers, from the Greek. Swords of this type are found as 'Kopis' on Greek vase paintings...both the word and the type are Egyptian...the classification ['Kopis'] covers the Turkish and Balkan Yataghan , the [Nepalese] Kukri, the [Indian] Sosun Pattah, and the South Indian flamboyant sword. Blades of pure Kopis form appear in India in the sixth century, at Ajanta, and persist into modern times. Their purity renders it probable that they were imitated directly from a Roman prototype, since we know that Roman influence was very strong in the Deccan [the northern part of South India] in the early centuries A.D., and there is no evidence to support a supposition of direct imitation from Greek instances.' (Rawson, pg. 67)
[This last statement, concerning a Roman prototype for India, I cannot give credence to, since the Greeks had a long presence in the northwest of ancient India. The Greek leader, Alexander the Great, crossed the river Indus with his army in 326 B.C., invading the area of the Punjab. And even at this time, he found Greek settlements already established in this part of India. The Greeks have long been known to the Indians, called in Sanskrit Yavana (based on the Greek Ionian ). --B.Slade]

'At Harasnath [in Rajasthan]...appears a relief showing a group of sword of the greatest interest...their blades are angled sharply forward. The edge has a long concave curve recurving slightly at the tip, but the reverse edge shows a clear forward angle with a small ear at the apex. This weapon is no doubt of a Southern type, also anciently indigenous in Eastern India [and Nepal]....this forward-angled sword is the ancestor of some of the weapons used in Northern India by Rajputs in modern times, such as the Sosun Pattah [Persian and Urdu word meaning 'lily leaf' ] and the Nepalese Kukri, as well as of some of the swords in use with more primitive peoples, such as the Kora of the Gurkhas and the obsolete long Dao of the Kacharis and Khasis of Assam.' (Rawson, pg. 13 ) 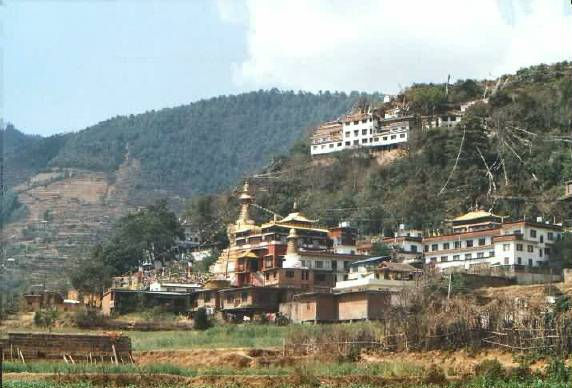 Gorakhnath Castle, in the hills above Gorkha (Nepal)

Some disreputable firms have copied pictures of Himalayan Imports' products off our website, and have used them
in their own advertisements to pawn off lesser-quality khukuris on unsuspecting consumers!
Please inform us if you discover illicit use of our content.