Carving  Back to Main FAQ Page

The kamis sometimes decorate the handles of khukuris with carvings.  Here are some examples. 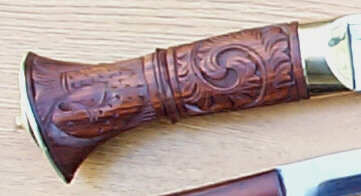 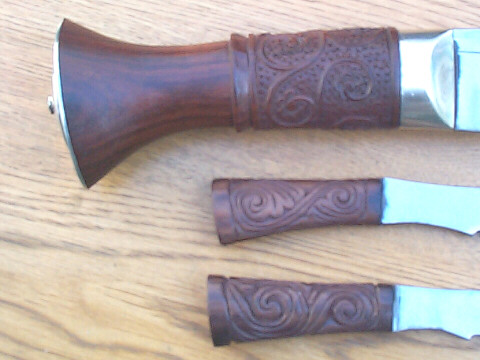 This one represents a "garud" or dragon.

This is a snow leopard. 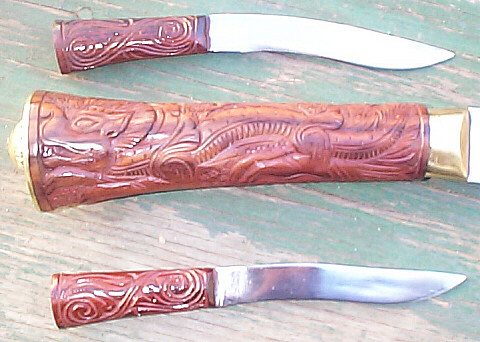 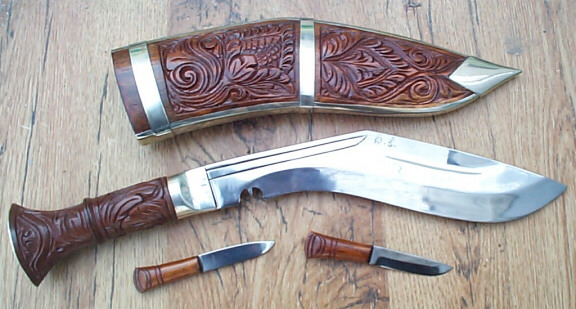 This khukuri is of Nepalese origin from the mid 19th century.  It is a nice example with the carved ivory grips. The small knives are carved as "bagh" or lions. They offer protection to the person who carries them.  JP 7/2001

The fearsome face in the carving above belongs to 'Kirtimukha' (also known as 'Chepu' in Newari) who is a protective deity. he is always depicted with just the head, two forearms and chomping on a snake/serpent.

The other image could just be the artists imagination or a seashell which indicates blessedness.   JP 7/01

Ganesh, Hindu god of good fortune, can be recognized by his elephant head.  HW 7/01

These are some of the symbols and meanings found on some kothimoras.

The ugly guy with only a head and hands is "Kirtimukha". Sanskrit for "the face of glory", he is always hungry and is
a protective deity

The "mayura" or peacock is viewed as a general symbol of good luck and prosperity. It is used in both Hindu and Buddhist culture and is "pancha raksha" or one of the 5 protective deities. Because of its resistance to poison, it has become the symbol for longevity.

The piece on the right also has crossed thunderbolts above Kirtimukha. Hindu: "Varja", Buddhist: "dorje". If it is one alone it represents the wisdom of enlightened beings. When crossed it is the symbol for creation and regeneration. Tibetan belief holds that the creation of the universe was initiated  with the crossing of 2 dorje. 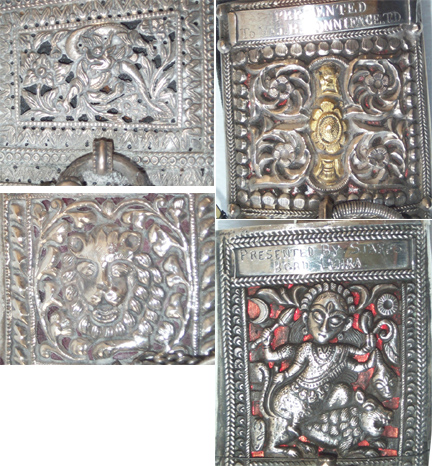 upper left: "makara" (maybe) a combination of animals and symbols that represent abundance and fertility

lower left: lion, or in Nepalese "bagh": Buddhist and Hindu and while may be associated with the divine. Gods use the lion as their transport and if you have this symbol with you it will offer protection

lower right: this is "Durga" and she is the most popular divinity in the Kathmandu Valley. Also called Devi or Bhagwati she is the female energy in Shiva and is the divine spirit in all women. She rides a lion and is the slayer of Mahisa, the buffalo demon (and others) and by doing this she restores order to the universe. To celebrate her victory buffaloes (and goats, birds, etc.) are sacrificed during her festival of Dasain.  JP - 7/01

Below find a variety of 'garuda' carved grips ranging from 1870 (far right) to mid 20th c. Also a close up of an interestingly carved blade from a kukri of around 1920. 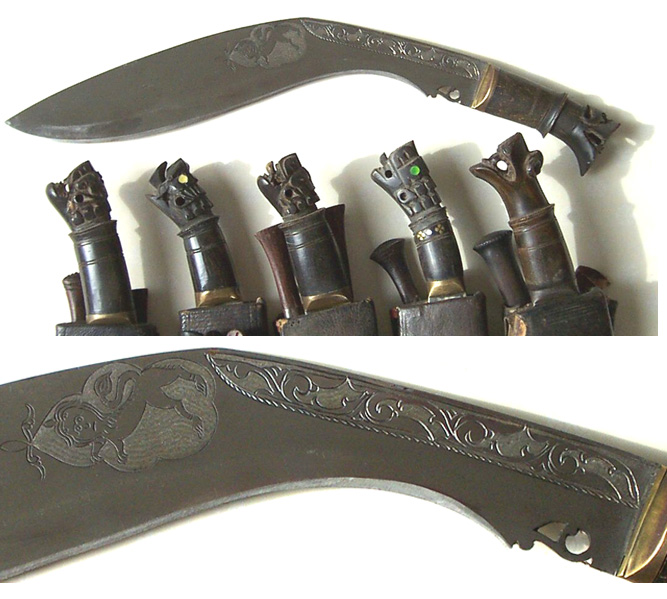 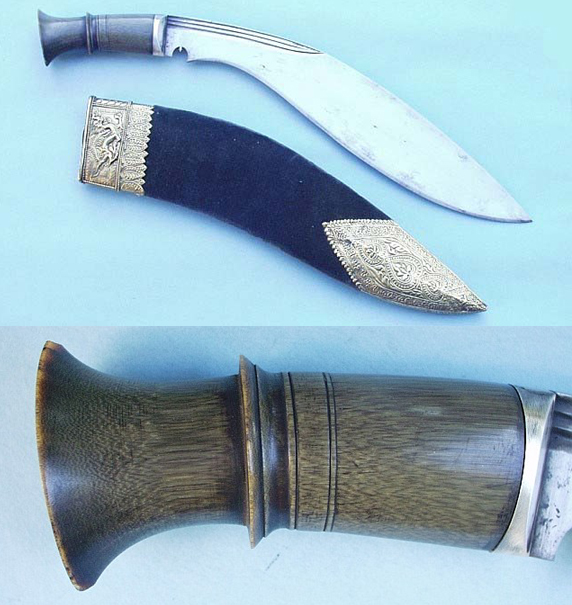 A carved ivory grip attached to a budhume style blade. The carving is very elaborate and deep depicting a Hindu scene. The knife is probably from c1790-c1810 and was made in western Nepal. This could be early Newari work.

This is a bit of an anomoly. Very Indian in feel and design but the elaborate wooden carving is more eastern than Nepal or India. I would almost attribute it to Assam or Burma, but it is very Victorian so I would think it was designed in India by an Englishman and carved there in the 1830-60s using a Nepali kukri that happens to be signed on the spine at the ricasso.

The locket from a very nice late 19th c Nepali kukri with a kothimora scabbard. It is not done in the normal 'regimental' style as there is no stud on the locket for the usual ring and sangli attachment. The chape is just as well done and the handle of the kukri is of beautifully grained and polished rhino horn. The dragon featured is a representation of teh 'makara' who brings luck and fertility to its owner. This may have been a wedding gift to a person of wealth. Facing dragons which are rarer double the luck and are only found on very high quality knives. This piece is probably from the Kathmandu Valley and could be of Gurung origin although the sunar was probably a Newar. Attached is a picture if the complete kukri and scabbard. Beautiful isn't it?  JP- 11/02 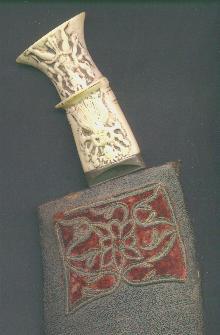 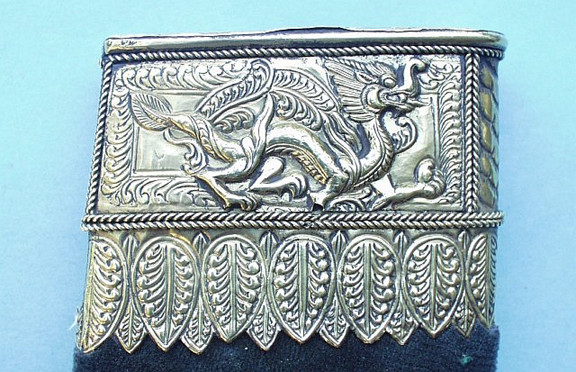 Makara, the dragon of abundance and fertility.

Copyright (c) 1999-2002 by Howard Wallace, all rights reserved.
This FAQ may not be included in commercial collections or compilations, or distributed for financial gain, without express written permission from the author.  This FAQ may be printed and distributed for personal non-commercial, non-profit usage, or as class material, as long as there is no charge, except to cover materials, and as long as this copyright notice is included.