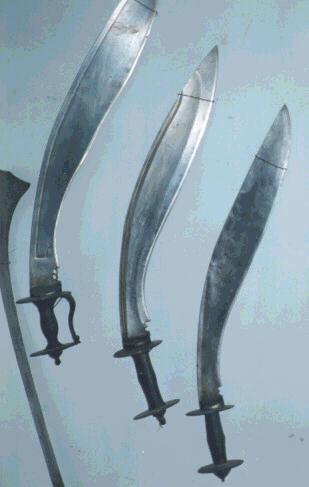 Here are three old khukuris which are on display in Nepal's National Museum. Interestingly, pictures of displays are usually not allowed and all cameras must be checked with museum guards before entering the museum. My brother-in-law, Jeevan, was able to convince officials that a few pictures of the displays in magazines and newspapers could only help and the officials agreed with him. His argument along with a nice "donation" to the museum is how we got the pictures.

My notes are not to be found but I believe these khukuris are in the 250 year age frame.  As I recall those were big khukuris, a couple of feet, and I'd guess them to be in the 2 to 3 pound weight range. Most of the khukuris in the museum were weapon oriented and handles were made to "serve and protect." The center khukuri might well be classified as a tin chirra.  I have held such khukuris with the talwar grip and the bottom guard is a real pain. If I had to use one I would get rid of the bottom ring which cuts into the wrist constantly. Little wonder many of the old Gorkhas wore leather gloves.

Those are the classic "tarwar" handles found on Indian pieces.  These were described to me by the folks from The Royal Armory when I was trying to research those 'tourist' models I have that were made in the early 1800s (1815-1860s is the latest guess).  They say this design is a result from the borders being so blurred (pre 1800) where Gorkha and Indian tribes were fighting with and against each other. 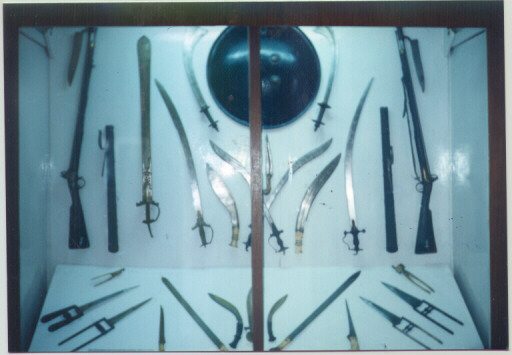 These are some of the personal weapons of Prithivi Narayan Shah, king of Gorkha, first king of Nepal, and organizer and commander of the world's first Gorkha fighting force. Prithivi was born in 1723 and died in 1775 so you can figure the age of these weapons pretty close.

Down at bottom center of the top photo you can see the forward curving khukuri with a complete arc. 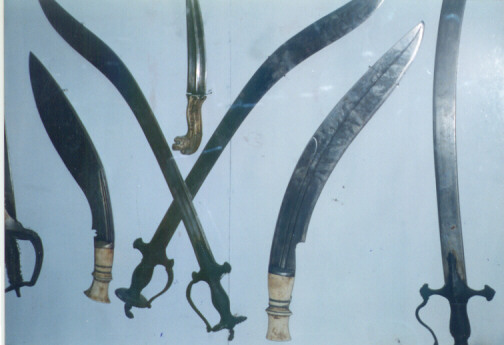 Here is a close-up of the two ivory handled khukuris.

Here is the story I heard -- whether true or not I can't say. The khukuri that curves in a full arc is called a "hanshee" (sp) khukuri and is sometimes called a "ladies" khukuri.
In the days of the first Gorkhas it was not uncommon for women to join the men in combat. When they did this was their khukuri of choice -- slender, light and fast. The khukuri was worn on their belts and held there by a wooden loop. Generally no scabbard -- probably because of the extreme arc a scabbard was tough to make and the khukuri tough to draw if there was such a scabbard.

The spatula design tarwar is an ancient design so they tell me, a descendant of swords used during the time of Buddha.

I can't prove any of the above. These are campfire stories I was told and am passing them on as such. 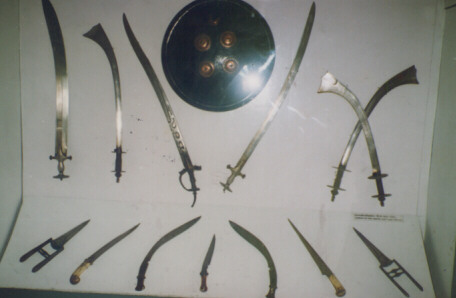 My notes on the back of this picture say, "personal weapons of King Pravya Shah (1559-1570)." I assume that's when Pravya was king. This pegs these weapons as about 450 years old. 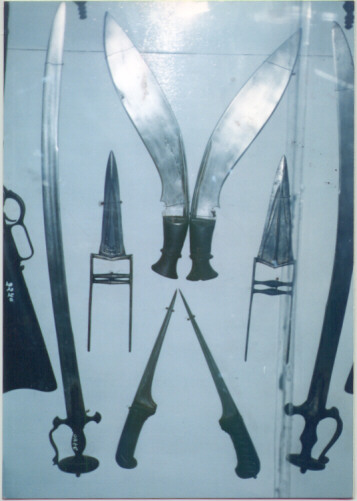 Here is a better look at a couple of katars. The two fat bladed khukuris look like our Salyan except for the handle.  (The stiletto type blades are kindjals. HW)

My notes say, "Personal weapons of Prime Minister Jung Bahadur Rana (1817-1877AD.)" J. B. Rana, as I recall, was prime minister of Nepal at the time of the Indian mutiny. He served as commander-in-chief of a force of 6,000 Gorkhas and took to the field during the siege of Lucknow. He is one of the great heroes of the Gorkhas and Nepal. Here are a couple of pictures of him. 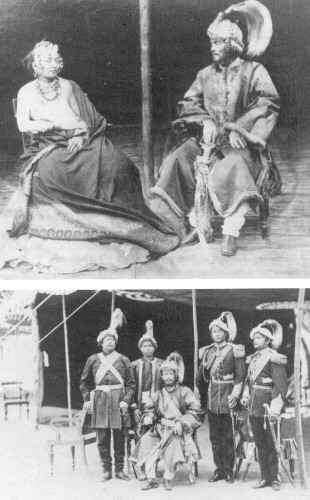 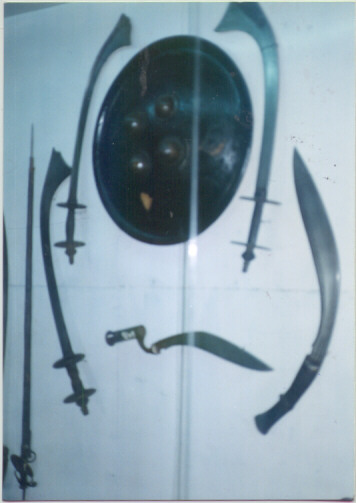 My notes on the back of this photo say, "Personal weapons of Bala Badra Kuwar (1814AD)".  I've been told that khukuris with offset handles such as the one in this picture were used as bayonets.

This socket style bayonet khukuri was first mentioned in dispatches concerning early Gurkha Regiments (1815-1819).
Apparently they were used only on parade to distinguish the new and unique regiments of "fierce little men".
In its' 12 page booklet on the khukuri, The Gurkha Museum shows a photo of a Nepalese Guard of Honor taken between 1815 and 1837 with this bayonet attached to English 'Brown Bess' muskets, but they are also carrying their fighting khukuris in their sashes.
This particularly rare model has been faked quite a bit to the point of cutting up perfectly good OLD khukuris and original 'Tower' bayonets and joining them together. The way to spot the fake is the type of weld.

Here are some more ancient weapons and a couple more katars. I like the one on the left which to me looks like a combo sticker and slicer. 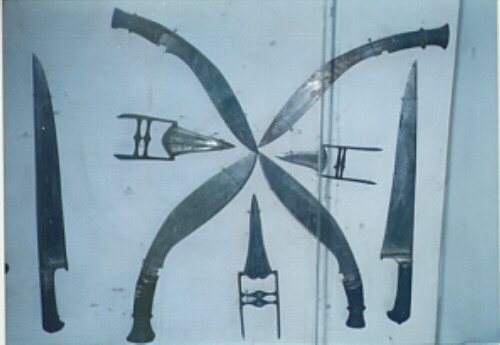 Three distinctly different katars, four old khukuris and a couple of I guess what I will call khybers since I don't know what else to call them.

No notes on the back of this photo so what shall we say -- 200 years give or take a little?

Here are a couple of old Nepali swords, about 200 years old. I would like to see the hamon on these and I wonder if there are any kamis left today who can make these. They look pretty respectable to me and these two were battle tested by Jung Bahadur Rama with good success. 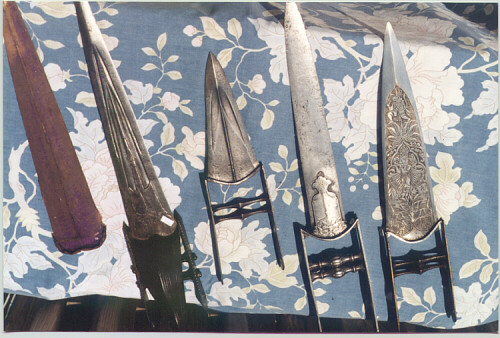 Here are four old katars from my buddy's collection. I am not going to publish his name because I am not sure he wants to broadcast that he keeps a really outstanding collection of Oriental blades in his home.

I like the one on the right and I have enough room under the bed for it.

Can't say that I especially like the background cloth for these but the katars themselves are great. 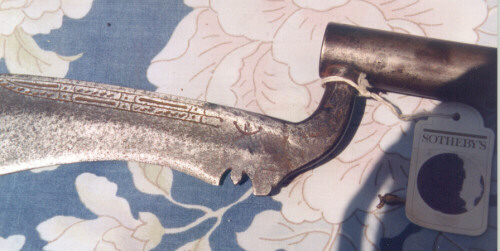 Here is a bayonet khukuri from my pal's collection. Notice the Sotheby's tag still attached! 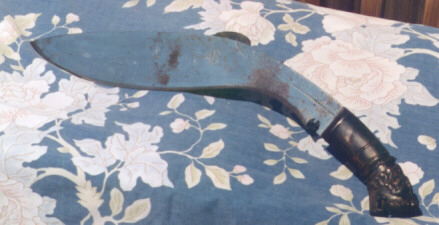 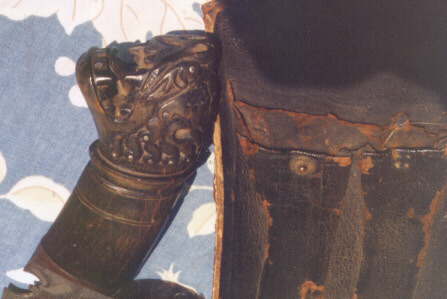 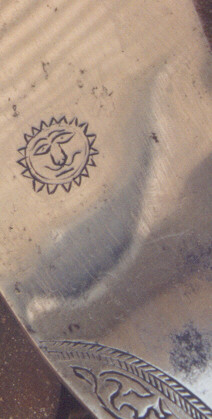 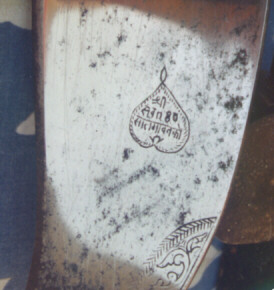 Here's a very nice old khukuri from my pal's collection. You can see the handle is what I think is a cobra's head.

Of interest in way of provenance is the date shown in Bikram Sambat, the Nepali calendar, and shows "80" which I assume is 1980 Bikram Sambat. This dates the khukuri at near 80 years of age. 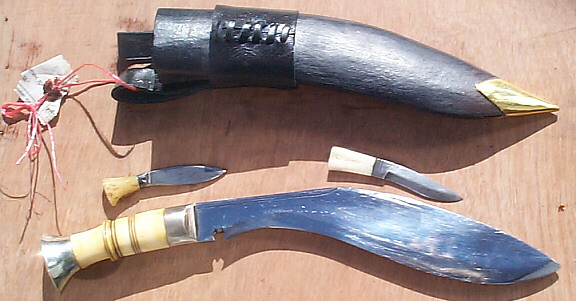 Pala got this knife from the grandson of a former Prime Minister of Nepal. When he was on active duty some 100 + years ago this knife was presented to the Prime Minister by HMG . The khukuri has been certified as being 100 + years old by HMG Archeological Society and bears the seal to this effect. The seal is visible in photo, placed on piece of newsprint and tied with red plastic wrap.

The khukuri is ivory handled and silver mounted. There is a small half inch crack in the handle at bolster on left side. The blade is in such excellent condition I questioned the age of 100 + years but there are a couple of very minor rust spots which indicate a little age and the cho is definitely of earlier manufacture. The cho of today does not look like this. There is a small hairline fracture in the blade near the tip but overall this is an excellent khukuri.

The chakma is ivory handled and it looks 100 years or more. My guess is the steel is of poorer quality than the big blade. The karda has been rehandled in bone but the blade appears to the in the 100 + year category. Both are well done.

The original scabbard was in shambles, rotten and bug ridden so Pala had the sarkis manufacture a new scabbard and military style frog for the rig.

From the collection of Mike Richard

The overall length is 18 3/8" and the spine is 5/16" at the bolster with a nice distal taper all the way to the point. The blade is a flat wedge cross section becoming convex about 1/2" from the edge. It's a quick and lively blade.

The most interesting thing about these knives is the deeply sculpted and formed scabbard. The knives themselves come in a variety of lengths with the better made ones having wood grips with round aluminum pins about an 1/8" diameter forming vaguely geometric designs.
Yours is interesting with the aluminum/wood combination. As you can see the engraving is quite crude and these were made for trade in Northwest Nepal with quite a bit of Afghan design influence. Not a high value attached but a nice addition to a collection. Dated from 1890 through the 30s. JP

Copyright (c) 1999-2001  by Howard Wallace, all rights reserved.
This FAQ may not be included in commercial collections or compilations, or distributed for financial gain, without express written permission from the author.  This FAQ may be printed and distributed for personal non-commercial, non-profit usage, or as class material, as long as there is no charge, except to cover materials, and as long as this copyright notice is included.