Khukuri Construction and Terminology Back to Main FAQ Page 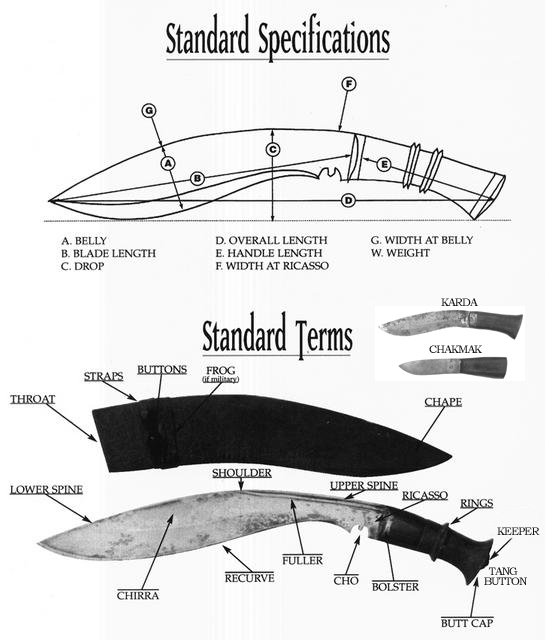 Edge - the sharpening portion of the blade.  on a khukuri, only the concave-curving lower side is sharpened.

Buttcap - on full-tang knives, the metal cap on the butt of the handle. also called a 'pommel'

Kauri / Kaura - also called a cho. a small notch in blade near handle.

Chirra - a fuller in the main body of the blade.  fullers are used in blades in order to decrease the weight without decreasing the strength of blade (the same concept as that of 'I-beams' used in building-construction).  some khukuris have no chirras, some may have multiple chirras (see note on chirras below).

Aunlo Bal -  the small fuller or groove often found along part of the upper spine. sometimes also known as a 'blood-groove' or 'the Sword of Shiva' (origin uncertain).
Other terms used include: "pwankh (the 'feather'), rato karang ('red rib'...from when they used lac to highlight a design rather than using a real fuller), aunlo bal ('finger of  strength/force/energy') and others I couldn't even get them to translate". -John Powell
"If the scrollwork and inlay in the Sword of Shiva had any meaning it has been lost in time. The scrollwork and inlay are the "khukuri system" which has been around forever". -Kami Sherpa
"Years ago the scrollwork was etched in by the kamis before the blade was hardened. Later some smart kami made a die so he could punch in the scrollwork and that's how it is done today. It is usually done after the blade is hardened. The brass inlay would not hold up to the heat". -Bill Martino

Handle rings - traditionally-made khukuris usually have a number of rings carved in the centre of the handle
"Kami Sherpa thinks the rings and little ridge once had a definite meaning of some kind -- almost certainly to do with religion -- but he says today nobody really knows what the meaning is or was. He points out that the configuration is fairly rigid. A pair of rings down maybe 1/4 of the handle length from the bolster -- small space and another pair of rings -- then the ridge with a single ring in it -- a final ring just below the ridge.   Personally, I find it very interesting that almost all good kamis use the same configuration but none of them know why they put it on the handle or what it might mean". -Bill Martino

Bolster - that part of a knife blade which abuts upon the end of the handle; metal divider between the handle and blade. sometimes also called a 'guard'

Cho - also called a kauri or kaura. a small notch in blade near handle.
"It has various meanings according to various people. A few are: the clitoris of Kali, the penis of Shiva, Surya ra Chandra (sun and moon, symbols of Nepal), a "Kowdi" ('cow-track' because the cow is sacred to the Hindus), a blood drip, a substitute guard, and on and on and on. Take your pick. The true meaning has been lost in time so today it is anybody's guess". -Bill Martino

Tang button - a single, small device added to a keeper or right on the pommel to secure the tang

Keeper - bigger than a tang button, but some people interchange the words. this is the diamond shaped device on (some) pommels

Frog - the leather or cloth sleeve that fits over the scabbard on military pieces. It has a loop or straps to secure the whole unit to a belt

Tip - the end of the blade furthest away from the handle

In the photograph below the green, red and grey areas are depressed.  the ridges are yellow. the spine's edge is blue.

This is a classic tin chirra:

Measuring a khukuri
The overall length of a khukuri is measured from tip to butcap, in a straight line, unless otherwise specified.  When someone speaks of a 20" Ang Khola, this is the measurement they are speaking of.

Copyright (c) 1999-2001  by Howard Wallace / 2002-2003 by Himalayan Imports,  all rights reserved. maintained by Benjamin Slade.
This FAQ may not be included in commercial collections or compilations, or distributed for financial gain, without express written permission from the author.  This FAQ may be printed and distributed for personal non-commercial, non-profit usage, or as class material, as long as there is no charge, except to cover materials, and as long as this copyright notice is included.