Bir Gorkha and Environs    Back to Main FAQ Page 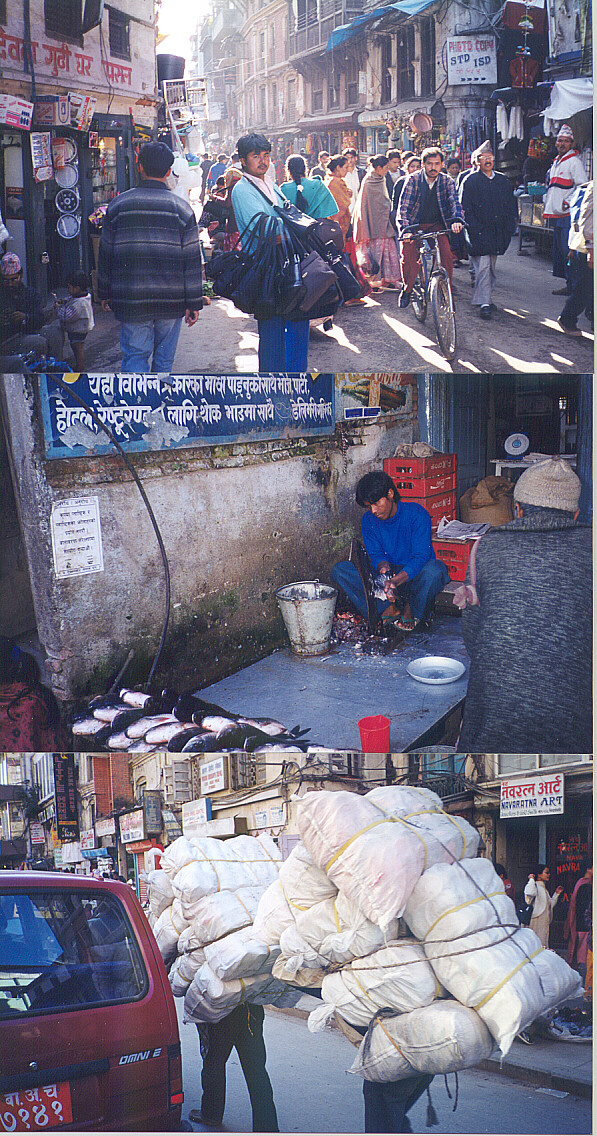 Up at the Manakamana shrine I met five porters passing by carrying heavy loads in dokas on their backs. I asked them how many KG they were carrying.
"Forty KG, five kilometers, ten rupia," the lead porter said.

I shook my head and replied, "Little brother, that is not much pay for that heavy load."

"Nepal ho," he said and continued on his way.

Top and bottom pictures were taken in Asan Bazaar, the oldest market in Kathmandu. Notice the Hindu shrine in the top pictures. You see these small shrines all over the Kathmandu Valley.
In the center pictures, a road leading to Asan, you can see a brightly painted rickshaw, still a major method of transport in Kathmandu. 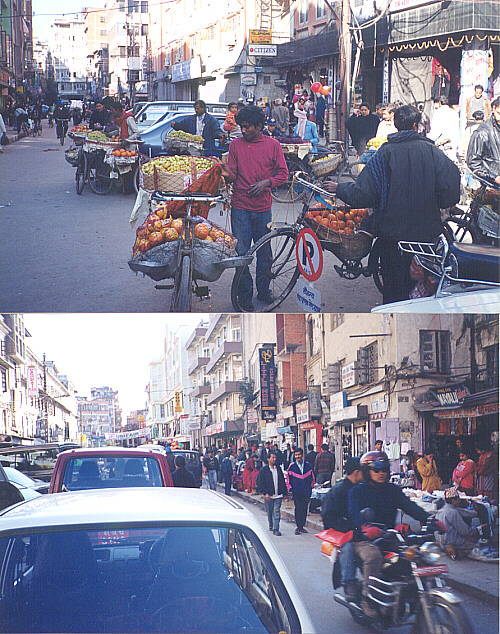 top -- Portable mini markets. You see these bicycle markets all over Kathmandu. Most are operated not by Nepalis, but Indians. 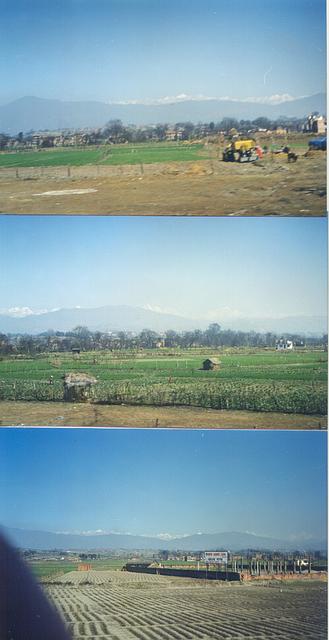 This is what I saw when I looked out the window of the car or taxi on my way from Anamnagar to Surya Benai and BirGorkha. This is one of the major roads in Nepal -- Kathmandu to Benepa. Across the hills you can see the peaks of the Himalayas. Now perhaps you can understand my reluctance to leave.

Anamnagar is just a quarter of Kathmandu -- sort of like Brooklyn and NYC, as an example.
The scenes above are what your khukuris see on their way from BirGorkha to Kathmandu for shipping. 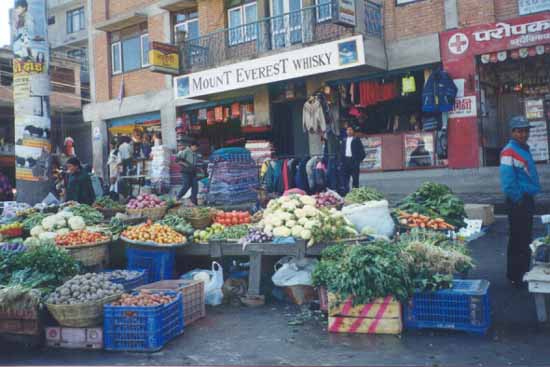 Surya Benai Bazaar. The produce shown here is only a couple hours old, gathered fresh every morning and the taste is there. It's not the same stuff you find at your local Safeway.

BirGorkha is owned by a Newari fellow who lives in Surya Benai. BM 3/2000

Top pictures --Here is Surya Benai and where we turn off to get to BirGorkha.

second pictures -- We turn right and follow this road between the building until we reach the footpath (bottom pictures.) Then it is a five minute walk down this footpath to BirGorkha.

As I mentioned sometime back when BirGorkha was situated on the street we were overwhelmed with visitors and Bura complained that he thought some of the visitors were spies, coming to see what we were doing and perhaps trying to steal techniques. This is the reason why the shop is located in the middle of the field and has no sign on it to advertise who or what we are.

It is a blend of old and new -- buildings, transport, tools, food, everything. Once outside the Kathmandu valley old tends to outweigh the new. Surya Benai is still in the Kathmandu Valley where things can be transported via road and electricity is available.

In order to operate BirGorkha as we want it is essential that supplies be readily available and electricity is a must. If we moved to some remote village we would have to raise our prices due to increased labor and import of supplies via porters.

There is now a "visit by invitation only" policy in effect and it is strictly enforced. I was in the shop one day when a stranger popped in to look around and he was told in no uncertain terms that his presence would not be tolerated. Ten kamis with hammers and khukuris in their hands make for a very strong argument. He left immediately and it was back to work as usual. 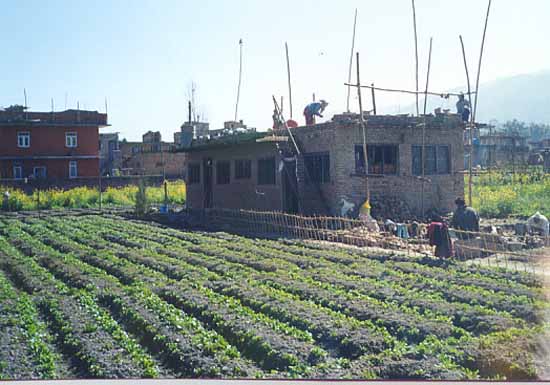 This was my first good look at BirGorkha. The second floor was just going up. By the time I left three walls were up. 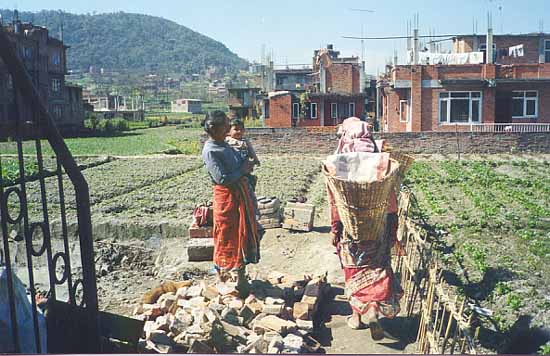 The construction is being done by several bricklayers and their wives. The wives haul in bricks in dokas on their backs. The husband mix mortar and lay the bricks.

BirGorkha does not look like much by US standards but in Nepal it's a top drawer facility, electricity and all.

The picture was taken in early Feb. and looking at the color of the fields gives you some idea of the weather. No freezing nights, generally bright, sunny 70 degree days. Not bad that time of year. Summers are a killer though, rains everyday, 95 degrees with 99% humidity.
BM 3/2000 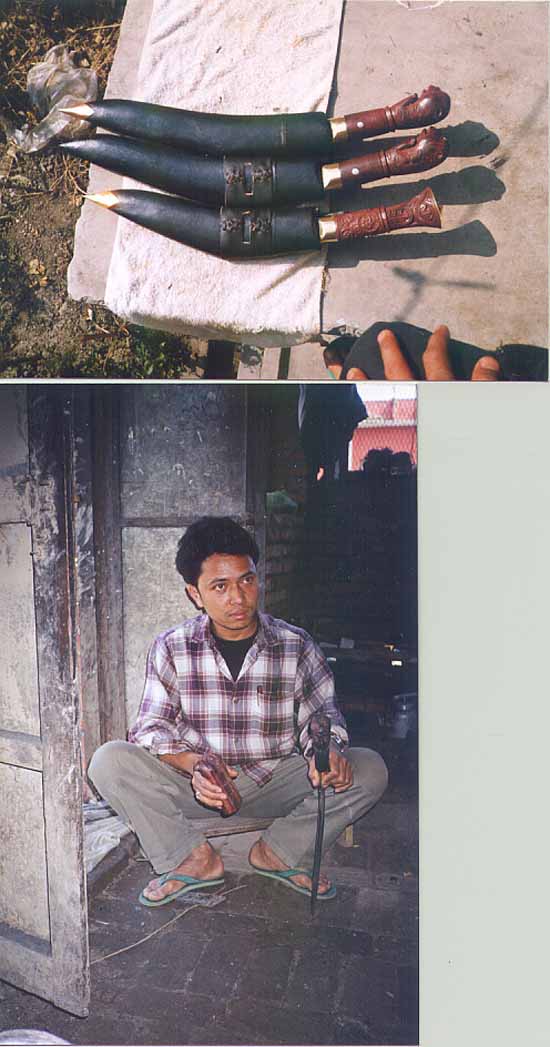 This young man belongs to the Newari caste that does carving. It is in their genes and it shows. He does excellent work and is a frequent visitor to BirGorkha. His home is just a five minute walk so it is very easy for him to drop by, ask questions, and then resume his work. He is a very nice young man and I liked him a lot. BM 3/2000 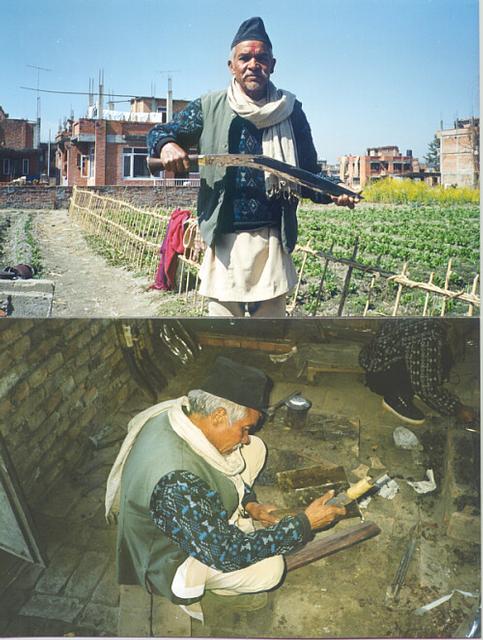 This is 65 year old Krishna Lal. He has 55 years shop experience and good ideas. He wanders in from time to time from his home to offer a little advice to the youngsters, sometimes makes a khukuri or helps make one, and earns a little cash.

We had a hard time communicating. Krishna is deaf and my Nepali poor and this made for the problem.

In the top picture he's holding a 30 inch Sirupati made by Kumar. "Put this cho on this knife so people will know I had a hand in it's making," he asked of Kumar. The knife has a very unusual cho.

In the bottom picture he is tormenting Bura, saying that he can make a better Banspati than Bura. Truth is, he can't. 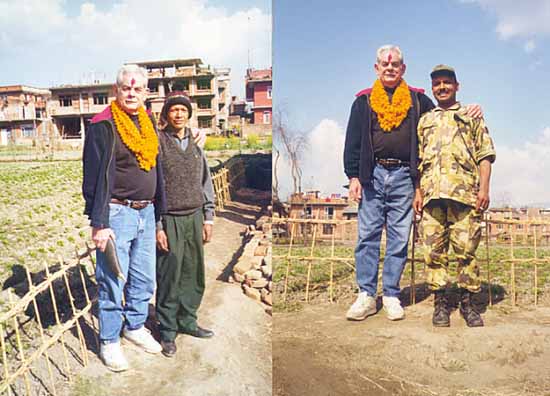 l -- Mama wants to have his picture taken with me. Fine. Mama claims to be 47 but he is older. He fears that advanced age may work against him. His eyes have gone bad because of too many years of looking at red hot steel. He makes an excellent khukuri but sometimes they are not as straight as they should be. He can't see whether they are straight or crooked.

Sgt. Karka also wanted to get a pictures with me. "Tell all our friends and customers we send our blessings to them too!" Message delivered. 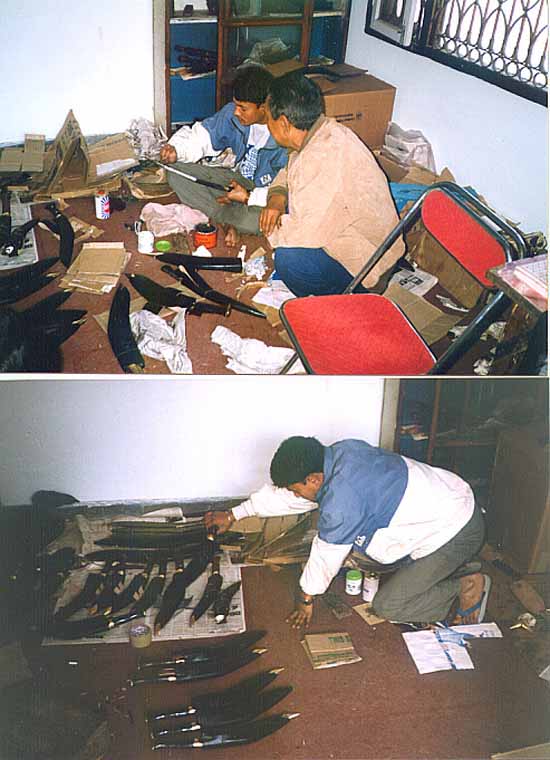 top -- Pala and Pradeep decide to reject a khukuri for some reason. Back to BirGorkha is goes for a little rework.

bottom -- This khukuri is okay and goes into the pile for shipping. 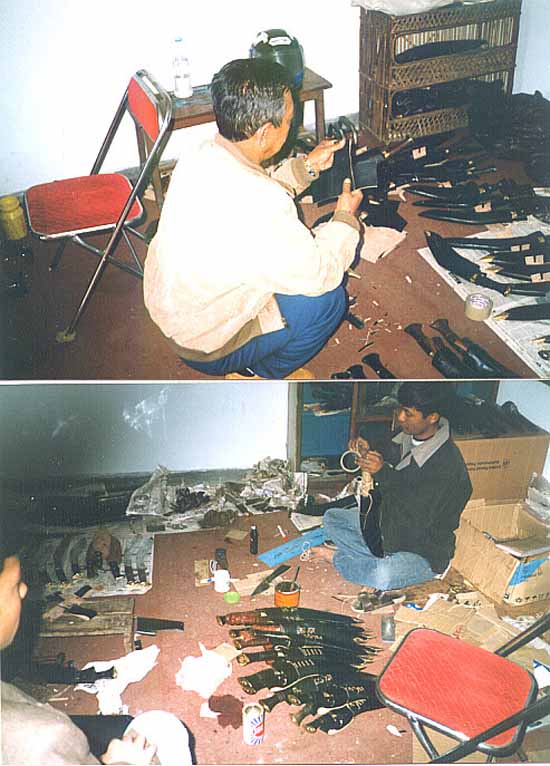 top -- Pala inspects the stitching on a superfrog.

bottom -- Gelbu tapes cardboard around a handle, hoping this will serve as some protection on the 12,000 mile journey to the US. 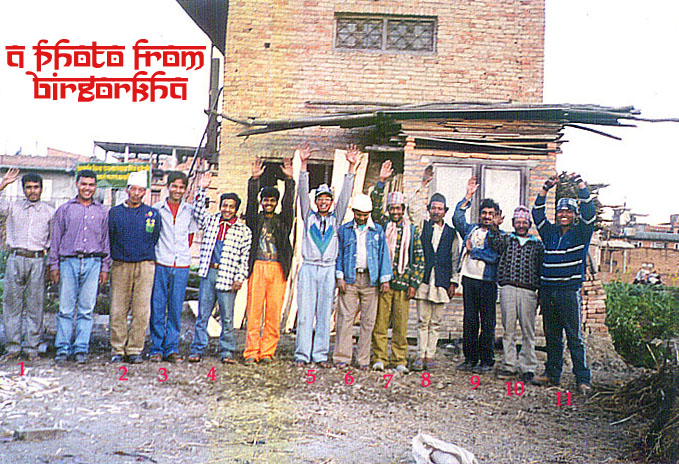 'A caring and generous forumite who may identify himself if he so chooses sent $100 to BirGorkha to throw a party for the kamis. The pix (if you can see them well enough) show the results. The kamis chose to take off Jan. 1 and start the new year (ours not theirs) off right. 46 people were fed including a few homeless men and a couple of orphans who were standing around watching with mouths watering.

A huge thanks from kamis and hungry homeless.' 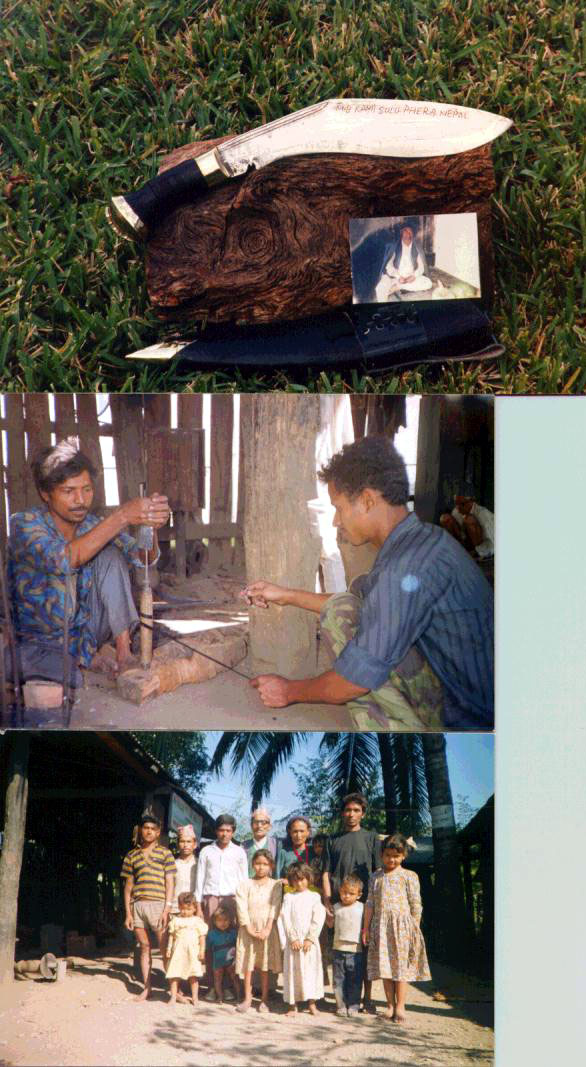 a khukuri made by the kami who made the khukuri that killed the bear.

Rough finish but incredibly strong blade and handle. Pommel is solid brass. You might be able to see him (Kancha Kami -- Solu khukuri maker) some in the small photo between knife and scabbard.

a handle maker drills the hole for the tang -- with only primitive drilling equipment available it is small wonder that four out of five handles in this operation result if failure-- you can see a master kami over against the wall on the right. Today, Himalayan Imports no longer uses this primitive method but employ power tools for drilling. The use of power tools has cut production costs dramatically and improved quality greatly.

a typical kami family, three generations. Notice the grinding wheel at left of picture. It is driven by a bicycle chain pulled by a helper. 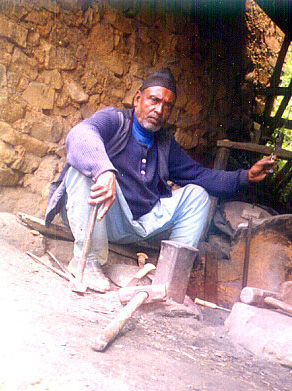 'I was digging thru my 10,000 pix file and happened across this pix of an old village kami. Can't remember his name or village. Big kami. He'd make about two of Bura. Interesting thing. Easy to tell in person if a kami is right or left handed. The user arm will be bigger than the other. The guy was not as mean as he looks.
Notice he's got 3 or 4 almost completed khukuris laying around. No helper.'
--Bill Martino, 12-Aug-2002

Copyright (c) 2000-2001  by Howard Wallace, 2002-2003 by Himalayan Imports/Bill Martino; all rights reserved.
This FAQ may not be included in commercial collections or compilations, or distributed for financial gain, without express written permission from the author.  This FAQ may be printed and distributed for personal non-commercial, non-profit usage, or as class material, as long as there is no charge, except to cover materials, and as long as this copyright notice is included.